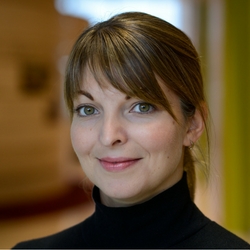 Caroline Laplante joined NC State in January 2017 as a Chancellor’s Faculty Excellence Program cluster hire in Modeling the Living Embryo. As an assistant professor in the Molecular Biomedical Sciences Department at the College of Veterinary Medicine, she will focus on uncovering the complex molecular organization and dynamics of biological contractile structures in single cells and in developing organisms. As a quantitative cell and developmental biologist, Laplante answers these fundamental questions using a combination of genetics, quantitative fluorescence microscopy and high-speed super-resolution imaging in live cells and tissues.

Laplante trained as a biochemist and obtained her Ph.D. in biology from McGill University. During her doctoral studies, she discovered an essential role for the differential expression of the cellular adhesion protein Echinoid in the polarized assembly of the contractile leading edge in the migrating dorsal epithelium during embryogenesis in Drosophila. Her postdoctoral work challenged commonly accepted notions about the cytokinetic contractile ring essential for cell division in animals, fungi and amoebas. She discovered that not one, but multiple myosins function to generate the forces necessary for cell division and characterized the distinct role of these three myosins during the assembly and constriction of the contractile ring in fission yeast. Laplante adapted high-speed Fluorescence PhotoActivated Light Microscopy (FPALM) to the study of live fission yeast cells. With this technique, she obtained quantitative images of the cytokinetic apparatus at unprecedented resolution. She discovered that cytokinetic protein assemblies called “nodes” are the basic unit of constriction of the contractile ring in fission yeast, and built a molecular model of the protein organization within the node.

COMPUTATIONAL BIOLOGY AND BIOINFORMATICS
Our research applies precision measurements of molecular, cellular and tissue dynamics in living embryos, along with computer simulation and modeling, to understand the development, growth and diversification of plants and animals.